Since they were carved in the Neolithic or Bronze age, many panels have been lost, moved, damaged in various ways, or even destroyed.  Recent damage is especially sad, but in some cases we may be able to find out more about the recent history of the panel and improve the record we make.  Aware of both moved and damaged panels at Dalreoich in Strath Rusdale, a NOSAS group did some research and then made a visit to find out what could be recorded.

Dalreoich is about 10km NW from the Cromarty Firth at Alness.

Our detective work began by examining the Canmore records, which show:

NH 5827 7648  A large cup-marked boulder is situated 390m SE of Dalreoich Farm to the E of a rocky knoll. The flat, upper surface has one cup-mark measuring 80mm in diameter, with a second, shallower one 90mm to the E.

NH 5827 7648 Cup-markings.  The remains of a farmstead and a cup-marked boulder are situated around a rocky knoll on the SW side of the public road some 300m SE of Dalreoich.  The cup-markings are situated on the E side of the knoll.

The grid references are identical, and the descriptions very similar, so it is likely that this is a duplicate entry.  There is a note appended to record 2 stating that ‘the boulders were dumped in the river’.  During the site visit it was confirmed (i) that it is a duplicate entry in Canmore, and (ii) that the panel is still there.  It was recorded in ScRAP as Dalreoich 2.

The observation ‘the boulders were dumped in the river’ more obviously fits with the three panels in the third Canmore record, which then became our focus.

The other evidence we have is the record on the Highland HER, which includes 11 images of the undamaged panels, submitted by Dougie Scott in 2010 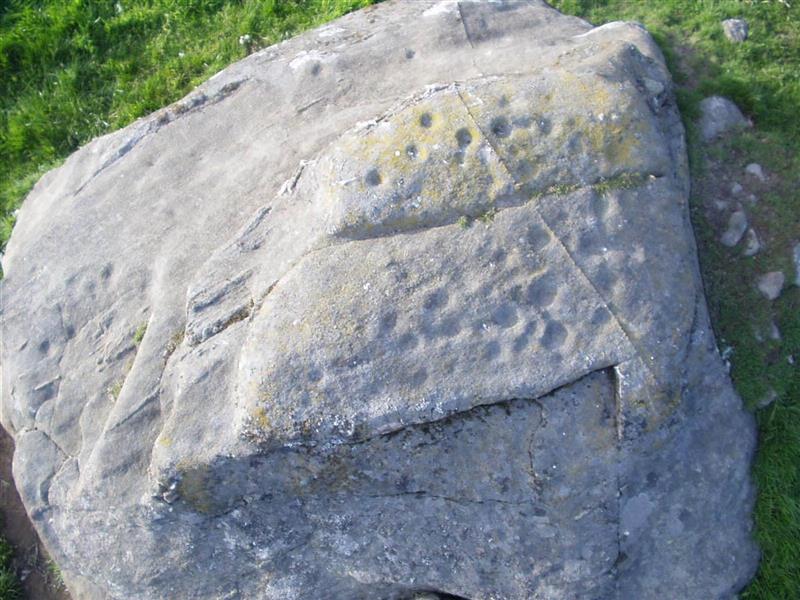 Finally, we have some sketches made by John Wombell during the Ross-shire Rock Art Project (RRAP) noting that the panels had been damaged and moved to the river bank.  John also noted two other unrecorded panels at that time.

After contact with local crofters and landowners, a NOSAS group visited the site on 24 September 2018.  We located the two unrecorded panels and recorded one of them.  The large size of the panel made it an ideal candidate for putting the camera on a selfie stick and controlling it using wifi. 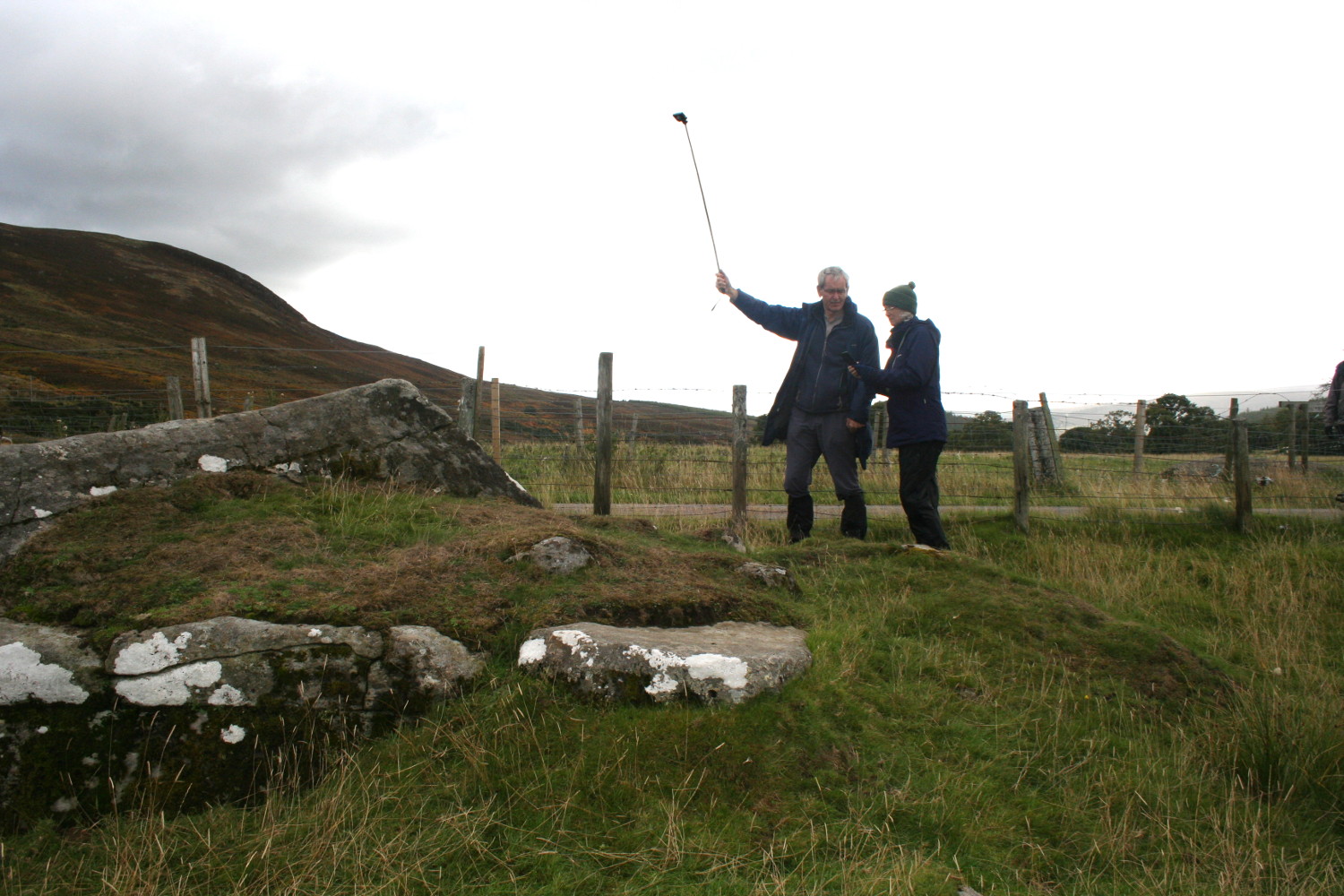 The second unrecorded panel is in a private garden and as the owners were away, we were not able to record it during that visit.

We located Canmore 68510, cleaned and recorded it.  We were satisfied that it is the same panel as mentioned in Canmore 68508.

We then explored the area along the river bank and located two damaged panels.  Both had suffered considerable damage, with large parts broken off (and missing) and deep gouging from the use of heavy machinery.  We could not at this stage say which was which.  We therefore recorded each to the best of our ability. 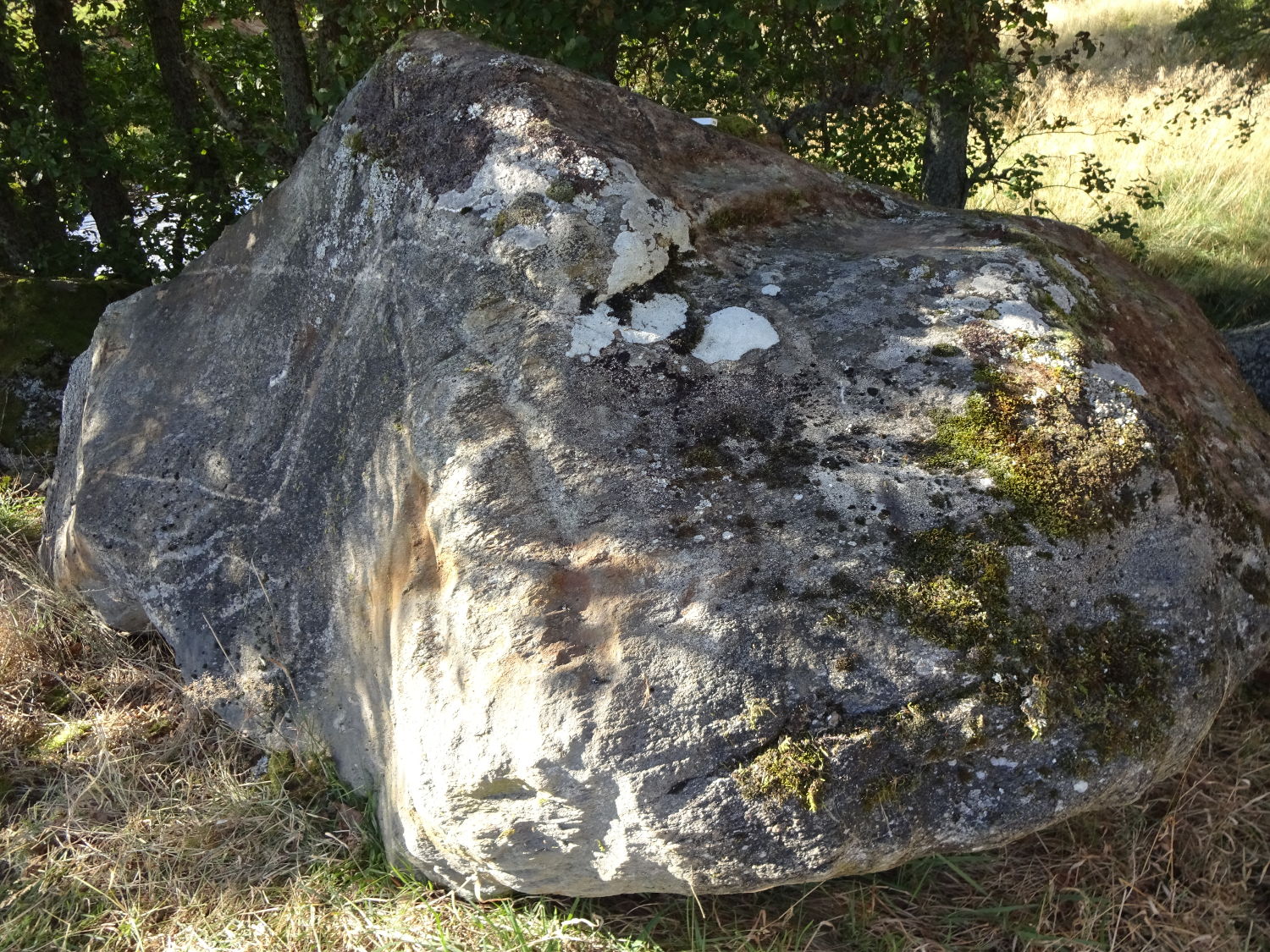 Dalreoich 4 damage and scratching © A Thompson

These are located as below: 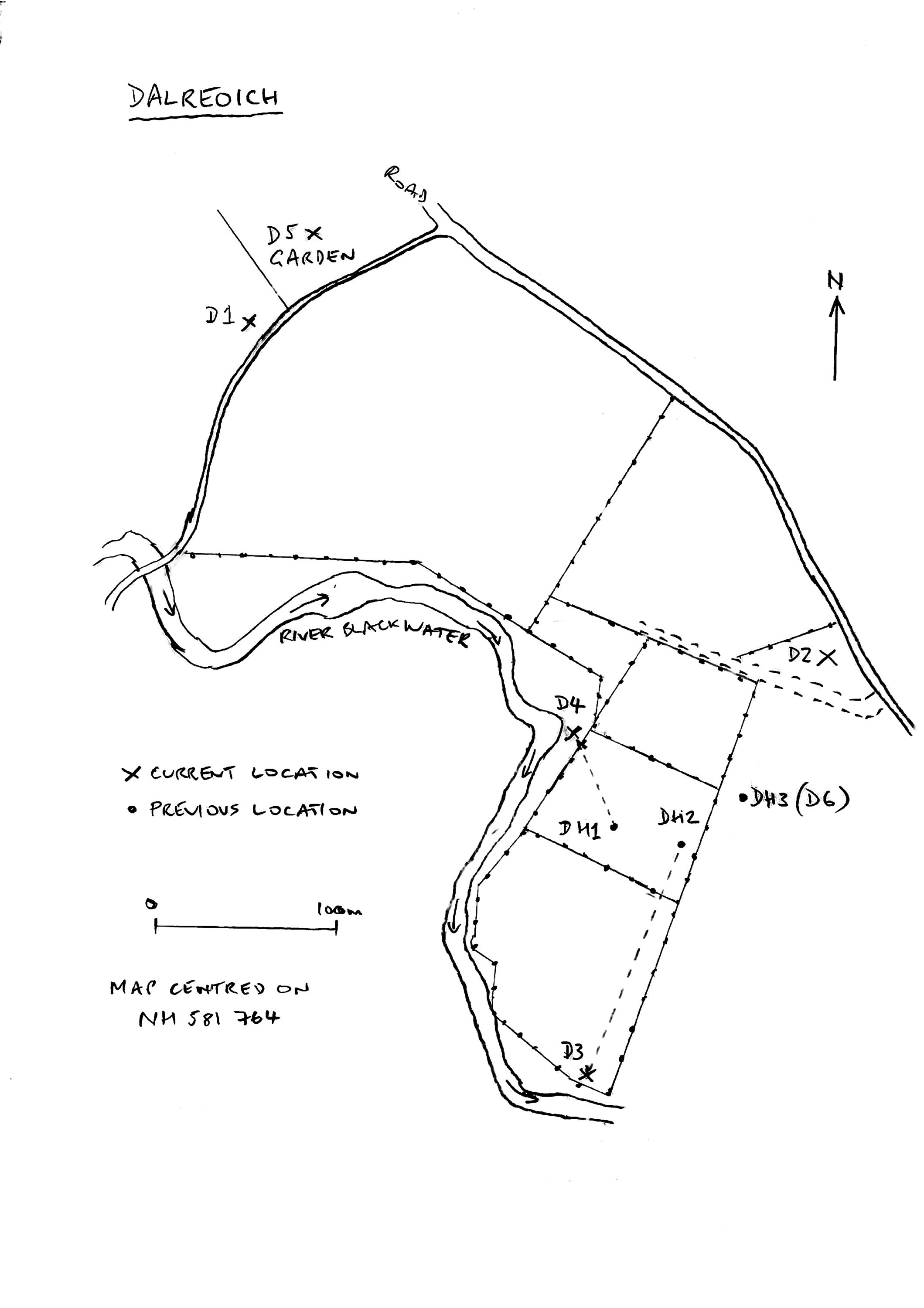 We then processed the images and reviewed the 3D models.  For Dalreoich 3 and 4 we compared these with the photos taken by Dougie Scott and George Currie of the undamaged panels.  We experimented to see whether we could use these earlier images to make 3D models of the panels, but that proved impossible.  So we tried instead to match our 3D models to the earlier images. 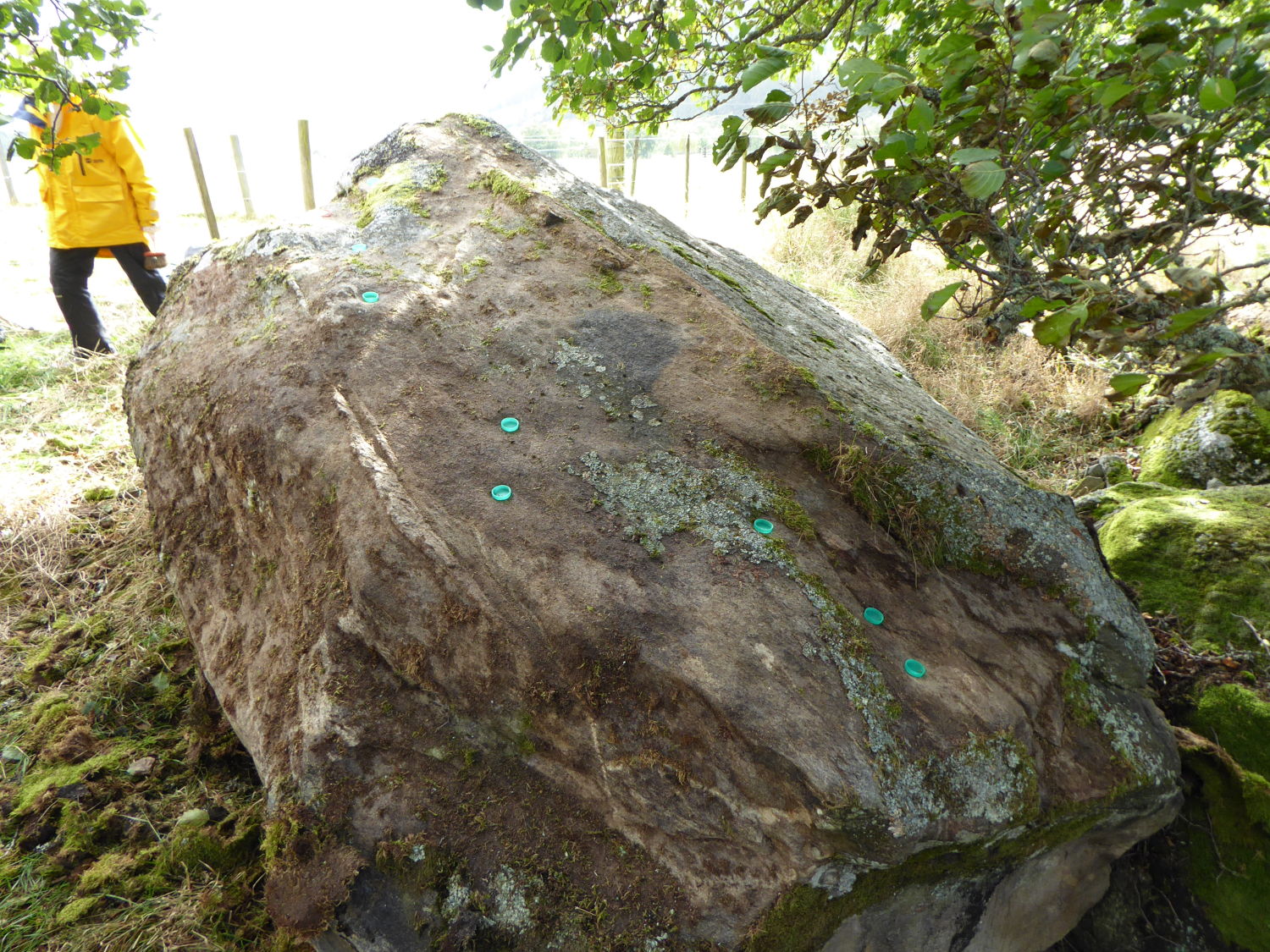 Dalreoich 4 as it is today, on the riverbank © A Cockroft

A feature of a 3D model is that it can be viewed from any angle and perspective.  We set the view to a typical camera perspective and viewed from above the panel.  This enabled us to match up the model of (damaged) Dalreoich 4 with the photo of the undamaged panel taken by Dougie Scott. 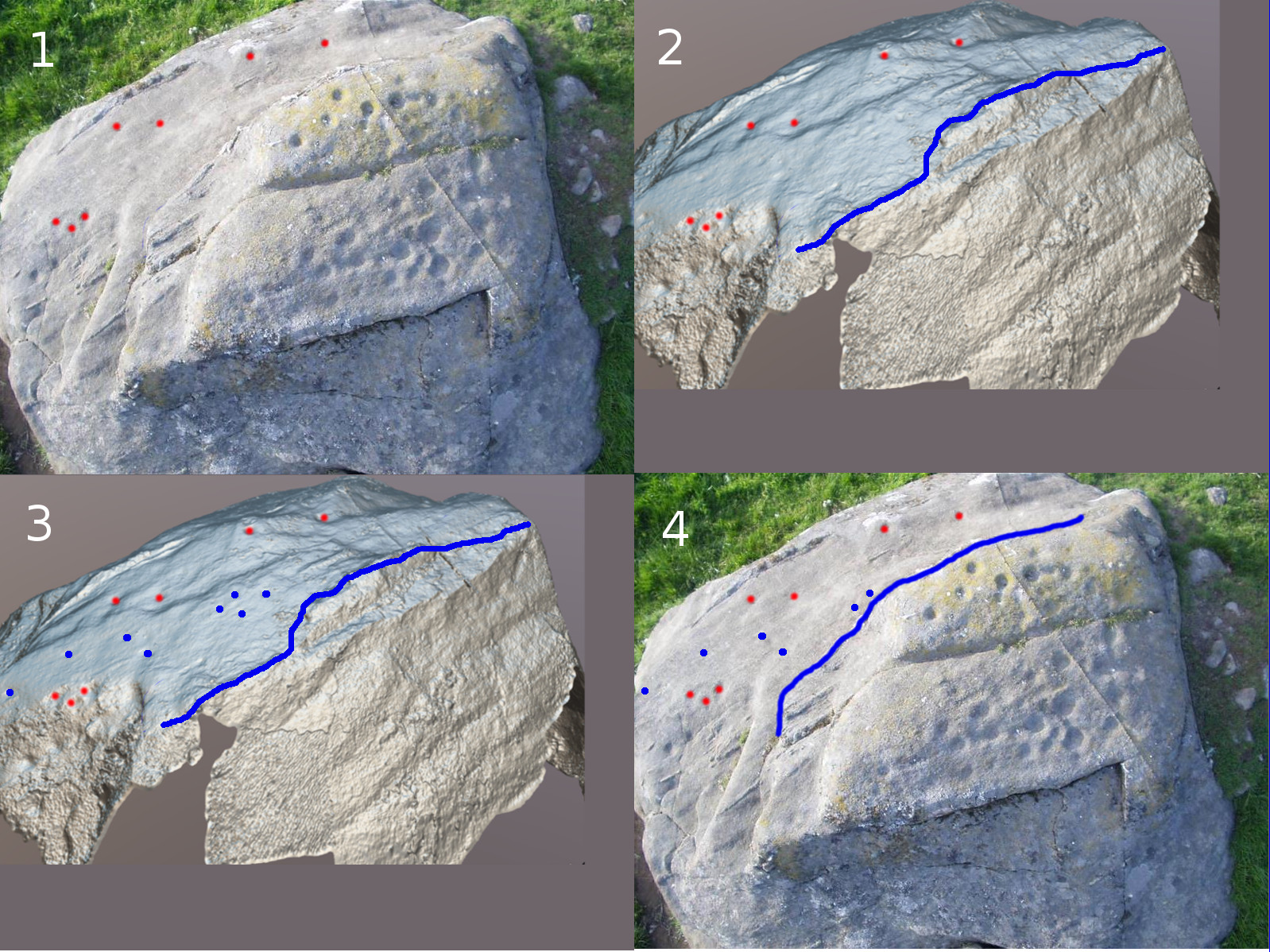 Dalreoich 4 Combining a photo with a 3D perspective

The images above show how this was done.  First (1) a pattern of cup marks which appear on the complete photo and also on the model were identified and marked.  Next (2) the model was rotated and scaled to match up the cup marks.  A line where the stone had been broken was also marked.  Additional cup marks not visible on the complete photo were added in blue (3).  Putting those cup marks back on the photo (4) shows that at least 2 would not have been visible on the photo from that camera position.

It was then possible to draw a composite sketch, and also approximately orient it using the photos and knowledge of the surrounding features. 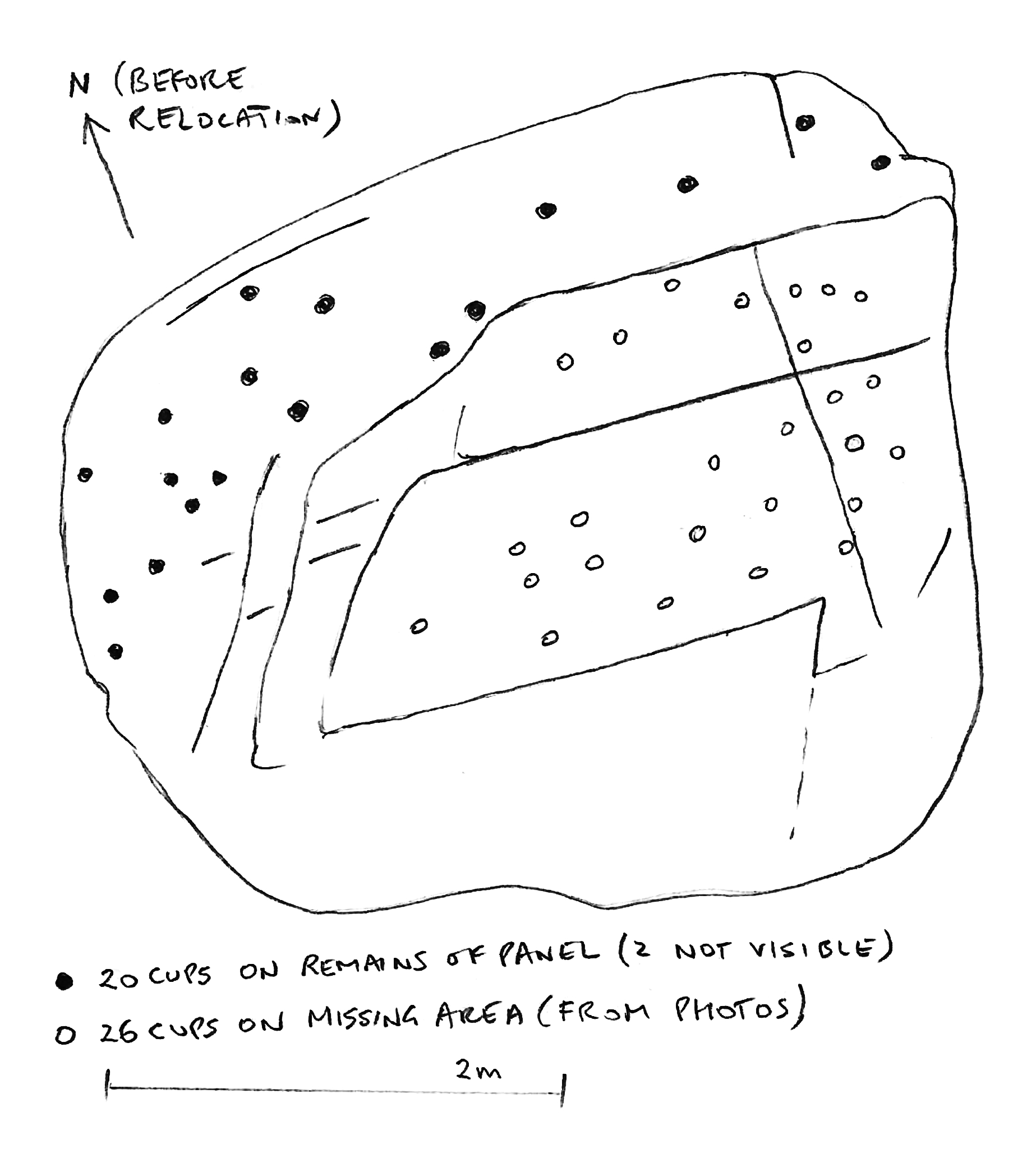 Finally, this image of Dalreoich 4 shows deep fractures in the rock, and it appears to have broken along them.  We were not able to locate the missing pieces. 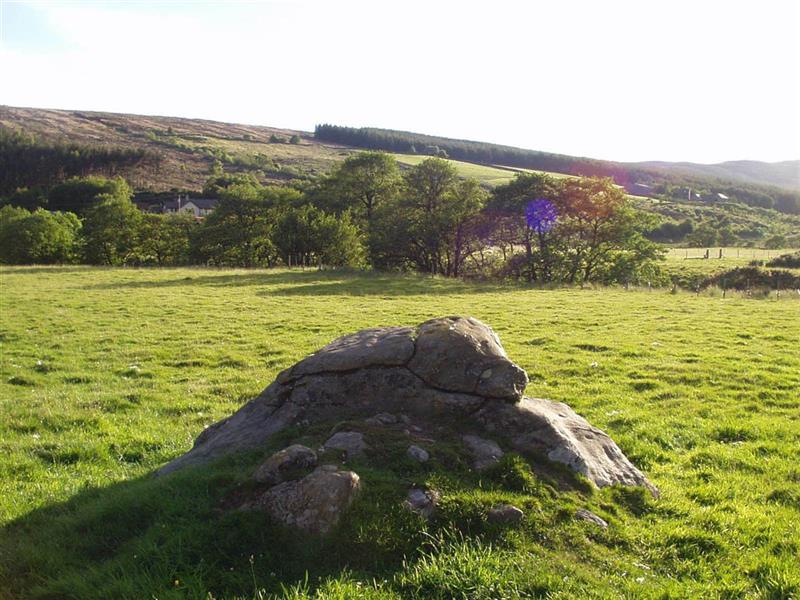 Moving to Dalreoich 3, this again is a large panel which was moved (and damaged) using heavy machinery. 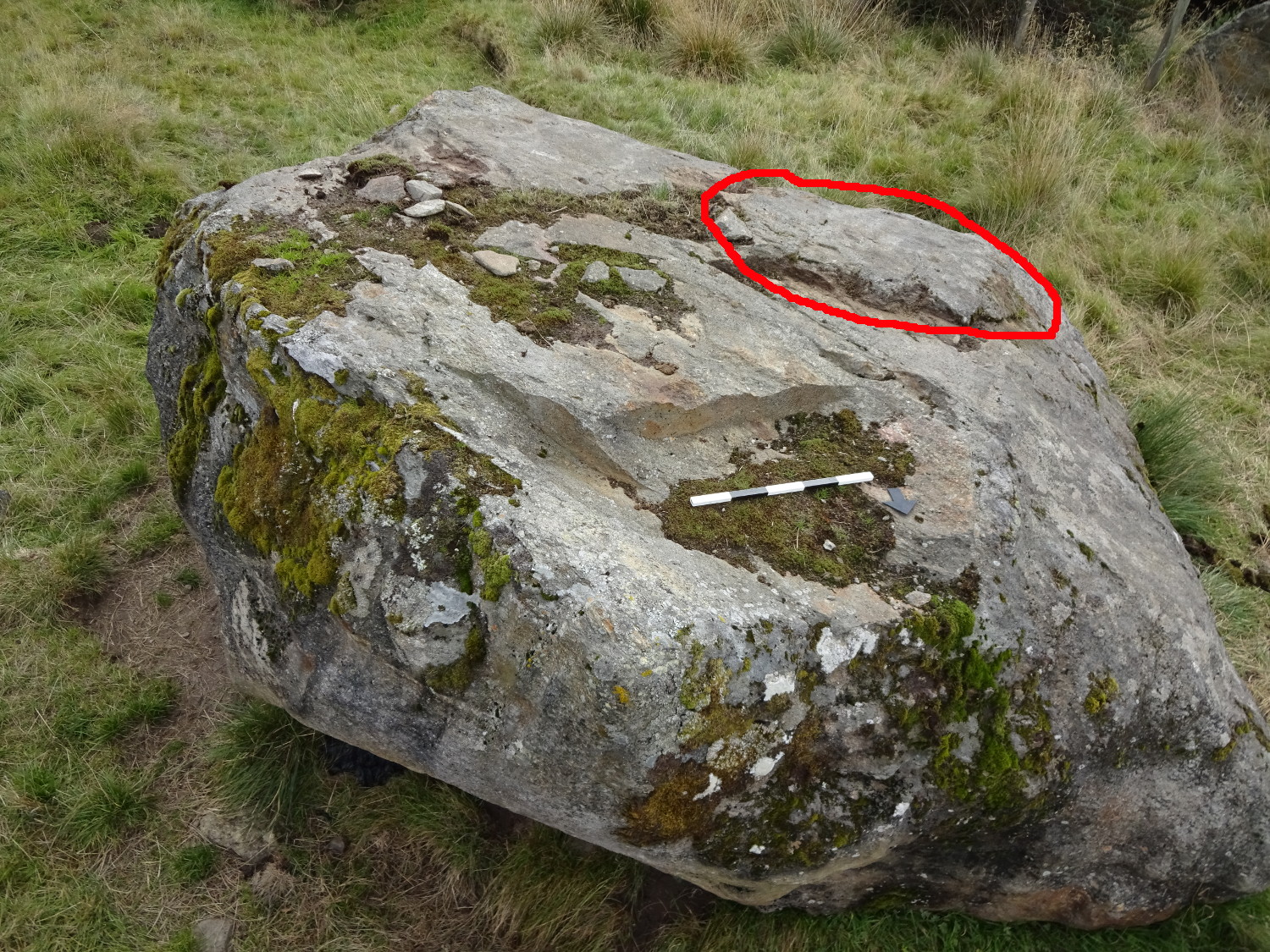 The damage on this large panel is also severe.  The 3D image below shows up the remaining cups including one very close to the break.  The scrapes are from the claws of the heavy machine. 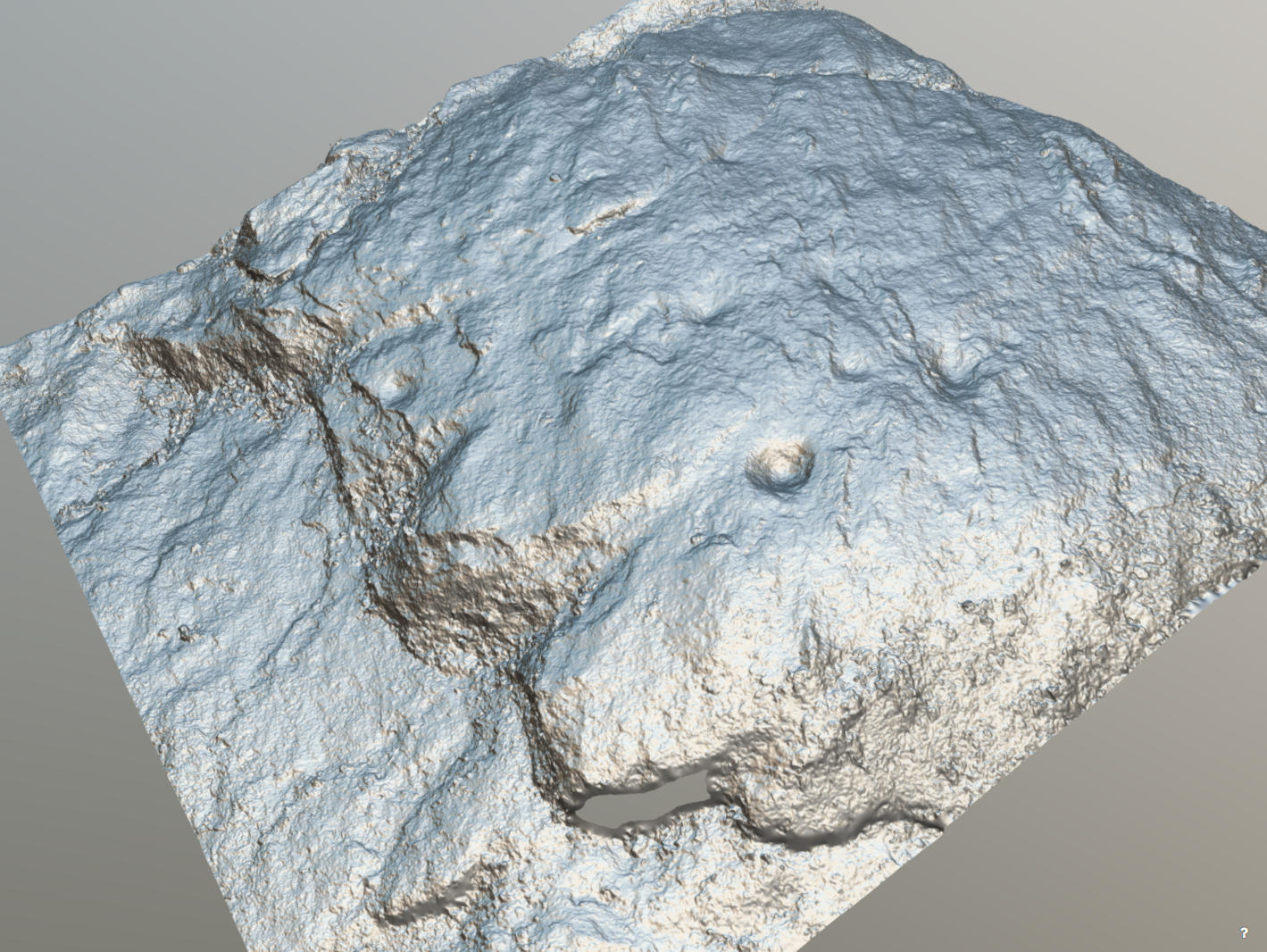 Overall, there was not enough evidence to reconstruct the appearance of Dalreoich 3.

Finally we looked again at some of the photos provided by George Currie and Dougie Scott, and this peaceful view, looking to the west, shows Dalreoich 6 (now missing completely) in the foreground, Dalreoich 3 in the centre and Dalreoich 4 in the background. 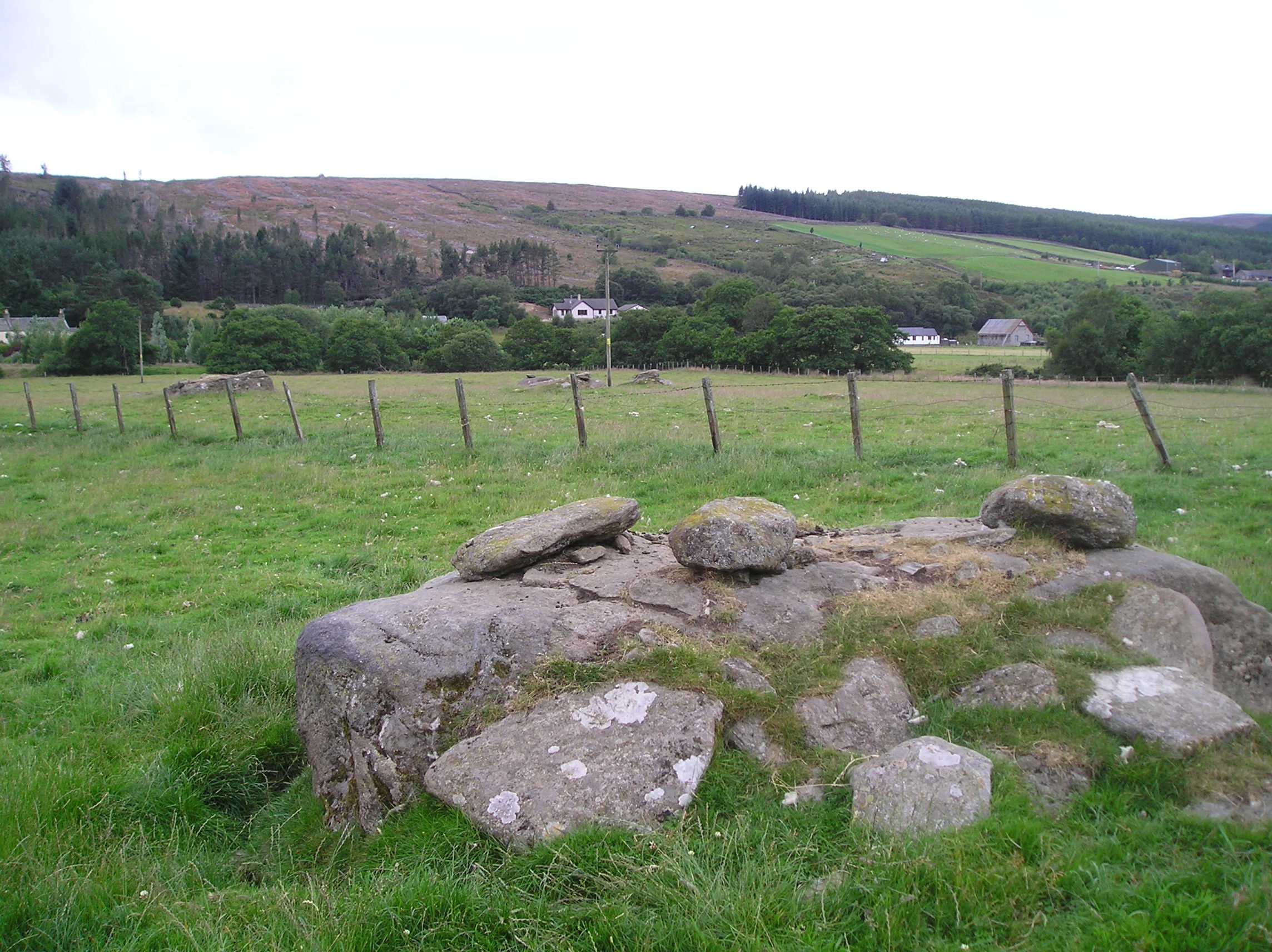 Reflections on the experience

As John Wombell remarked as we embarked on this project ‘we are all detectives’.  I thought he meant that many panels would be hard to find (they are) but reconciling what we can find with what’s on the record can be challenging as well, not just in cases like Dalreoich.

Panels will, I suppose, always deteriorate or be damaged for one reason or another.  The damage to these panels is a reminder how important it is to make good records.  The photographs taken by Dougie Scott and George Currie help us to make sense of what we see today.  If only they’d taken a few more photos from different angles!  It would have been great to be able to make a 3D model using them.  The sets of photos that we make for photogrammetry are a primary record for the future.

I plan to visit Dalreoich again to record Dalreoich 5, and will look again at the heaps of stones in the area.

Thanks to Dougie and George for letting us use their photos.  Links to the SketchFab models of three of the panels (1, 3, and 4) are below.