During the Scotland's Rock Art Project we worked with our trained Community Teams to create 3D models of prehistoric carved rocks across Scotland. The method we used is called Structure from Motion (SfM), which is an image-based modelling technique (often called photogrammetry). This is a user-friendly and accessible digital tool - all you need is a camera and a scale bar! You can find out more about SfM and image-based modelling below. If you want to experiment with creating 3D models of rock art (or any other object), you might be interested in our guidance notes on Field Photography for 3D modelling, Creating a 3D Model, and Enhancing and Sharing your 3D Model.

Image-based (3D) modelling techniques are becoming increasingly widely used in archaeology for 3D recording and visualisation of monuments and artefacts. These techniques are particularly well-suited for recording rock art because they show the whole shape of the rock, and also enable us to see faint carvings. 3D modelling is also an excellent technique for large-scale community-led recording as it does not require specialist equipment or advanced training, and is relatively quick to use.

Structure from Motion (SfM) is a method commonly applied in archaeology. It is very versatile and can be used at a variety of scales. In order to produce a 3D model, you need to capture a sequence of photographs, covering the whole surface of the rock. Each sequential photograph has to overlap with its neighbour by at least 30%. This means that in the next picture you take, you will always have to include at least 30% of the previous photograph.

Each photograph includes recognisable features that are identified by a dedicated software. the software will match these features together and create a 3D model. The final model can then be manipulated in order to enhance the surface and the texture of the rock, and highlight the carvings. The model can then be visualized in different ways by digitally changing the light conditions and surface renders so that the carvings appear more distinct.

RTI is a digital imaging technique that we will use occasionally to document specific panels and motifs. Like SfM, RTI is an accessible and low-cost method that is widely used in archaeology, particularly for recording archaeological artefacts. For rock art, RTI enables visualization of important details of the motifs.

RTI has been increasingly in the heritage sector in recent years, and its use in rock art studies is now widespread. RTI is a straightforward technique that enables analysis of subtle changes on the surface’s texture. This allows us to view and assess the shape of the motifs, details of the grooves, tool marks, and so on.

RTI is captured through a sequence of photographs taken from a specific point where a static camera is positioned. Light is shone over the rock surface from different directions as the photographs are taken, making a type of ‘light dome’ over the rock. A reflective sphere, such as a black billiard ball, is placed on the rock surface in order to reflect the light source. Each photograph captures a different position of the light source, which is recorded in the reflective sphere.

The images are then processed in a designated software, which can be freely downloaded from the Cultural Heritage Imaging website. The software combines all the pictures together and identifies the light sources. This creates a PTM (Polynomial Texture Map), which can then be manipulated and enhanced to aid analysis.

In general, the capture of RTIs should take around 30 to 40 minutes, depending on the complexity of the carved rock and time involved in setting up the equipment. The number of photographs required to create the model vary between 50 and 90.

The RTI final file can be viewed in the free RTIViewer software available from the Cultural Heritage Imaging website. This allows the visualization of the carved rock under different rendering modes, highlighting the engraved motifs. By digitally moving the light source around the PTM, different details of the carvings become visible. 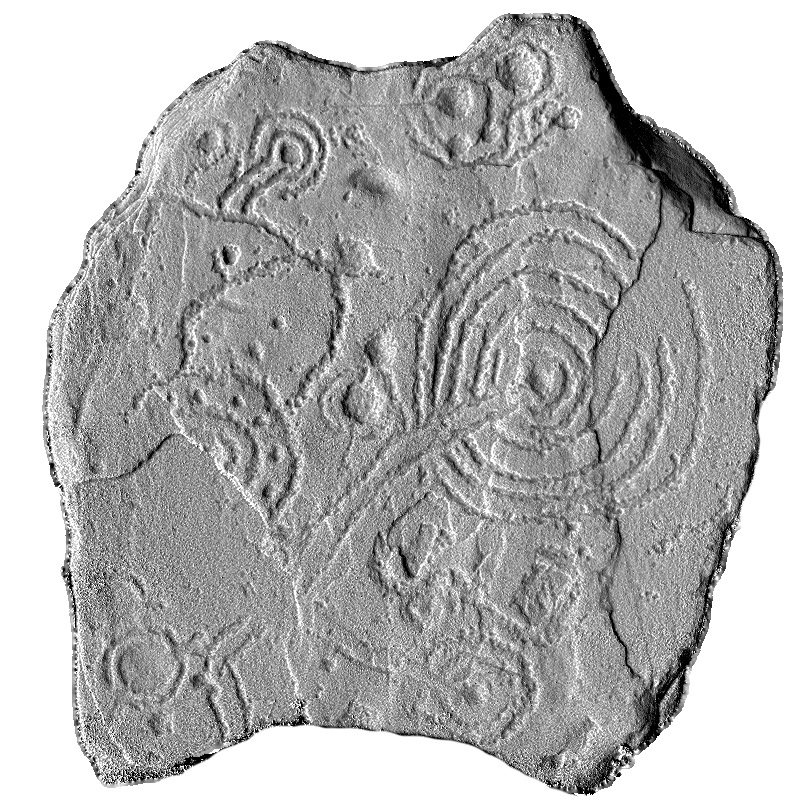 3D Model of one of the carved stones stored at kirkdale house (kirkcudbright, Dumfries and Galloway). 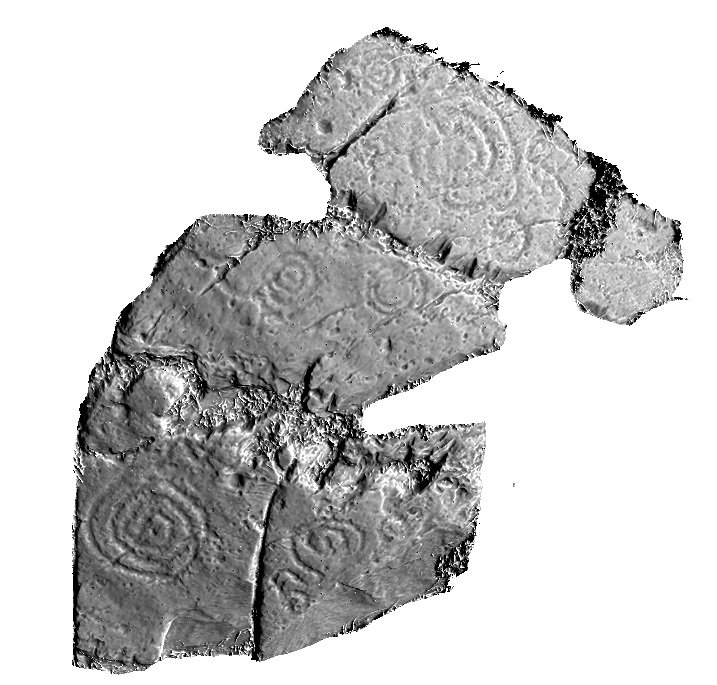 3D Model of one of the panels part of the group named Knock 3 (Monreith, Dumfries and Galloway) 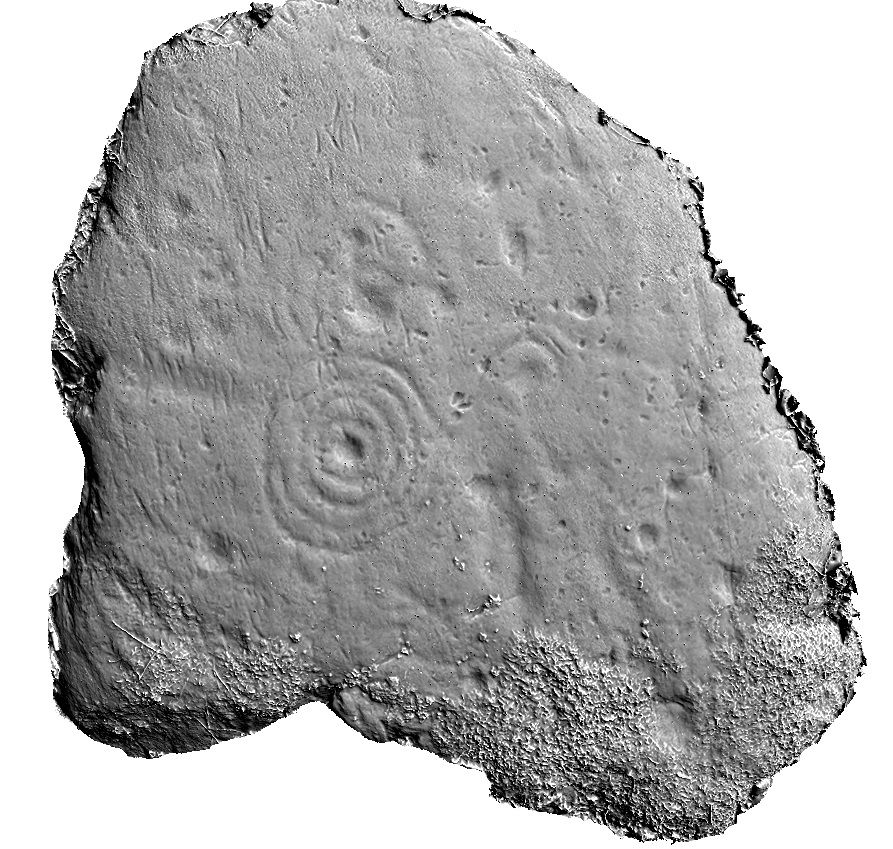 3D Model of Knock 4 (Monreith, Dumfries and Galloway). this model clearly shows the heavy weathering of the rock and the damage caused to the surface by the grazing animals.

Creating detailed, digital records of Scotland's rock art is essential for better understanding, sustainability, and public awareness. You can find out about our recording methods in this section!

Finding rock art is very rewarding, but often quite difficult! In this section we offer a few tips that may help you find those 'hidden' panels.

Before going out and looking for rock art, there are some important things that you should be aware of. You will also need to know what equipment to use. You can find out all about it here!

Follow these simple steps to prepare for a fantastic day out doing fieldwork and recording rock art. Don't forget your wellingtons and waterproofs!

Like any other type of archaeological fieldwork, rock art recording uses specific methods and techniques. Learn how to record rock art, and find out what types of information you should be documenting.

Once you have processed all the information collected in the field, your photographs, and your 3D models, you can upload it to Canmore. Find out how in this section.