Volunteering with ScRAP: from Kilmartin field school and beyond

I started working on the Scotland’s Rock Art Project when I took part in a field school run by ScRAP at Kilmartin Glen last summer.  I had just graduated with a degree in archaeology and was looking around for an interesting project for my last fieldwork as a student, and the Kilmartin field school seemed like a wonderful opportunity to work in such a significant archaeological landscape.  I must admit, however, that I hadn’t had much experience with rock art before then, other than a some opportunities on family holidays to tramp through a cow-pat-spattered field to look at mysterious marks on an outcrop being licked by the cows.  Although, on reflection, that was probably quite good preparation for the project… 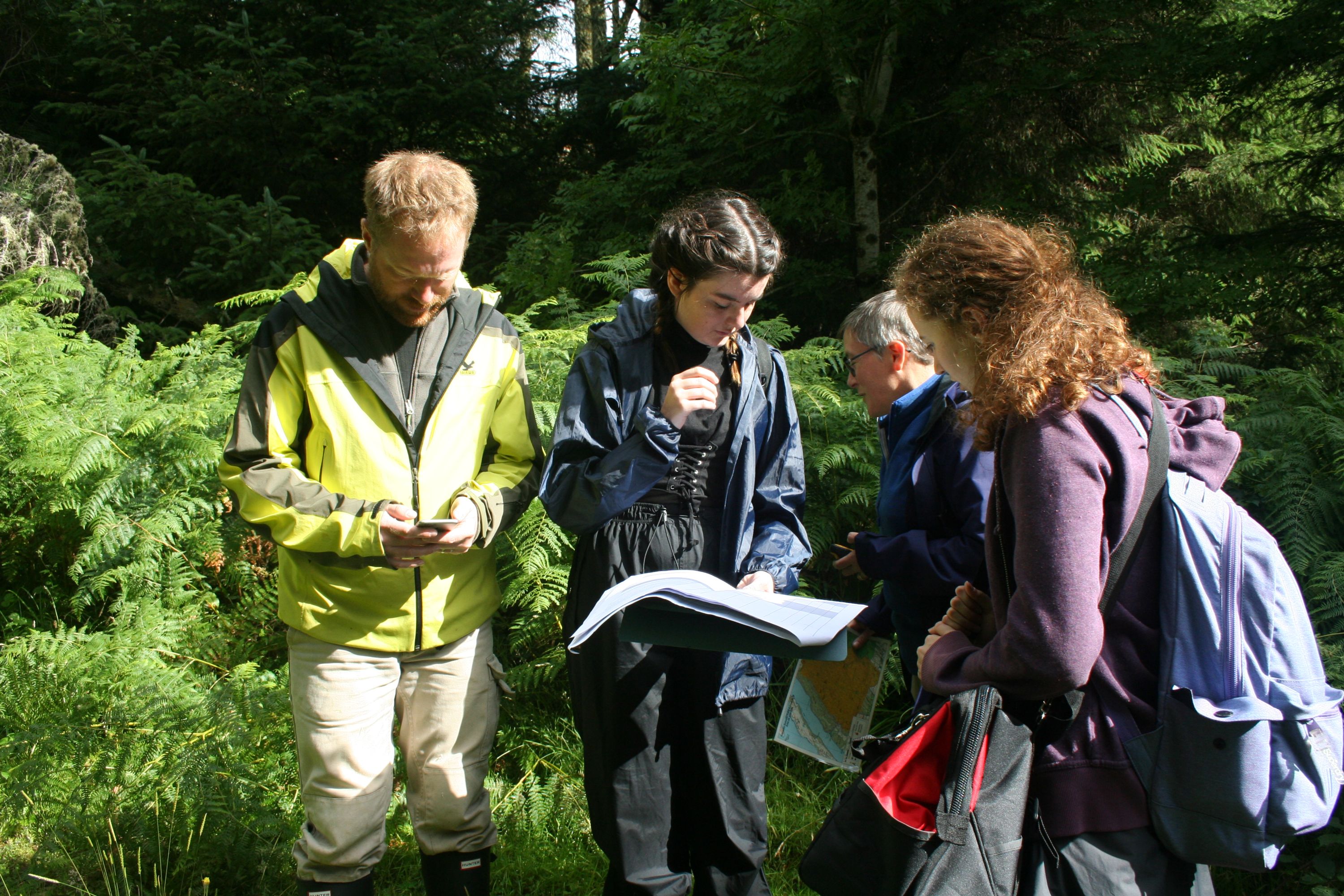 Before setting out for Kilmartin, the group received training in Edinburgh on rock art, ScRAP itself, and on the techniques of photogrammetry.  We also got the chance to do some dummy recordings of panels in the field.   When we got to Kilmartin, the aim of the field school was to try to record as many panels as possible in an area which is fairly dense with rock art, and students were divided into groups with designated areas and a number of panels to cover.  These were often relatively isolated locations and we had to be fairly self-sufficient in the field, so the initial training proved very useful. 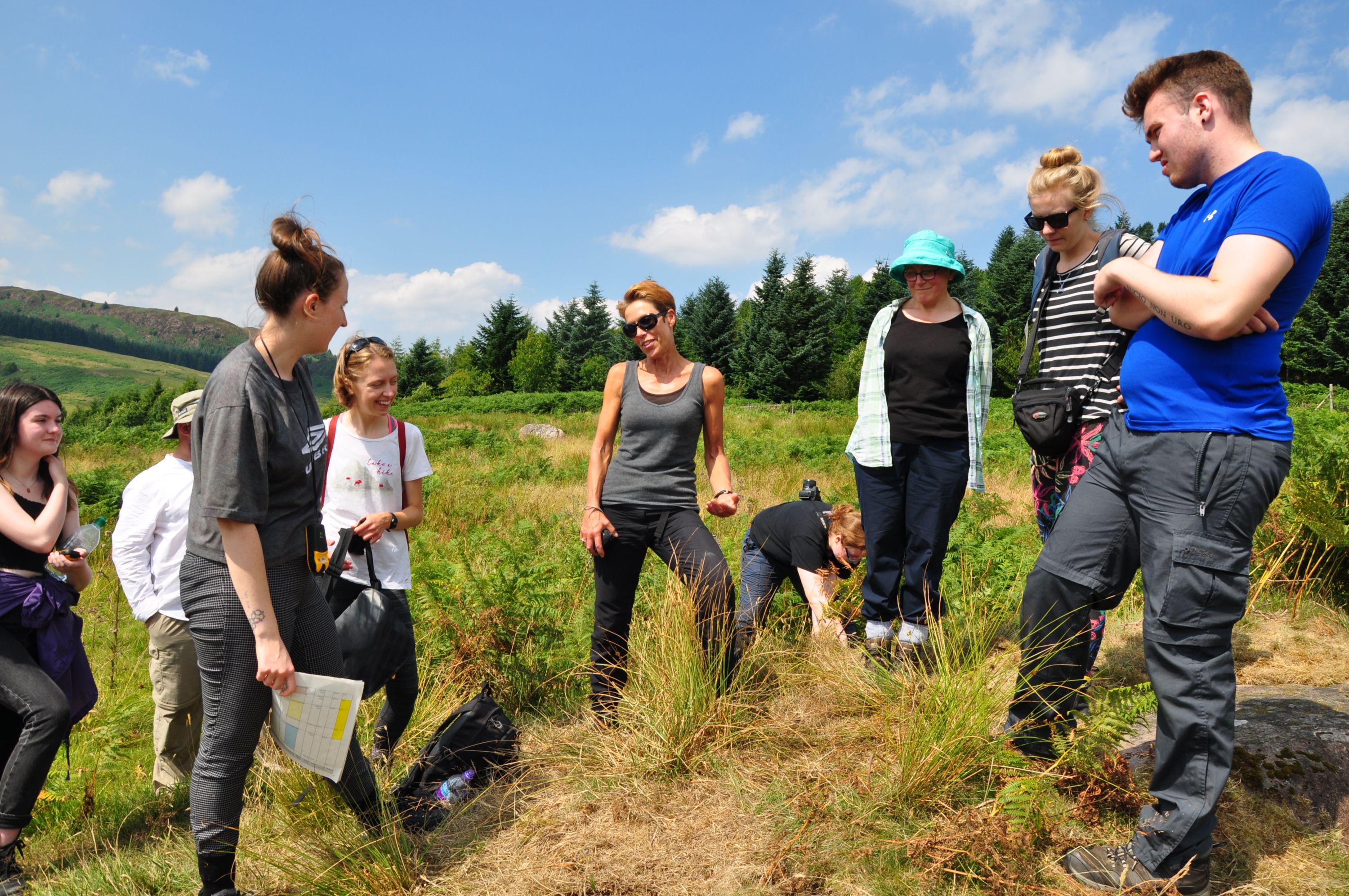 Students in the field at Over Glenny, Port of Menteith, receiving training on recording rock art

As we became familiar with our areas one thing I found striking was that, even when you are used to reading a map, the challenges encountered on the ground can be quite be surprising.  For example, it was often necessary to deal with things like inquisitive livestock (pigs for us – horses and cattle for other groups) and the vast seas of luxuriant bracken which hid a lot of useful things (like the rock art) from view.  The biggest challenge for my group, however, was that we were working within Ormaig forest and the panels we were looking for were often inaccessible amongst densely-planted trees.  It was tantalising to come so close and not be able to see or record them, particularly as some had not been seen since the 1960s when they were first identified.  However, we did get an opportunity to visit the large, and extremely impressive panel at Ormaig which was discovered in the same period. 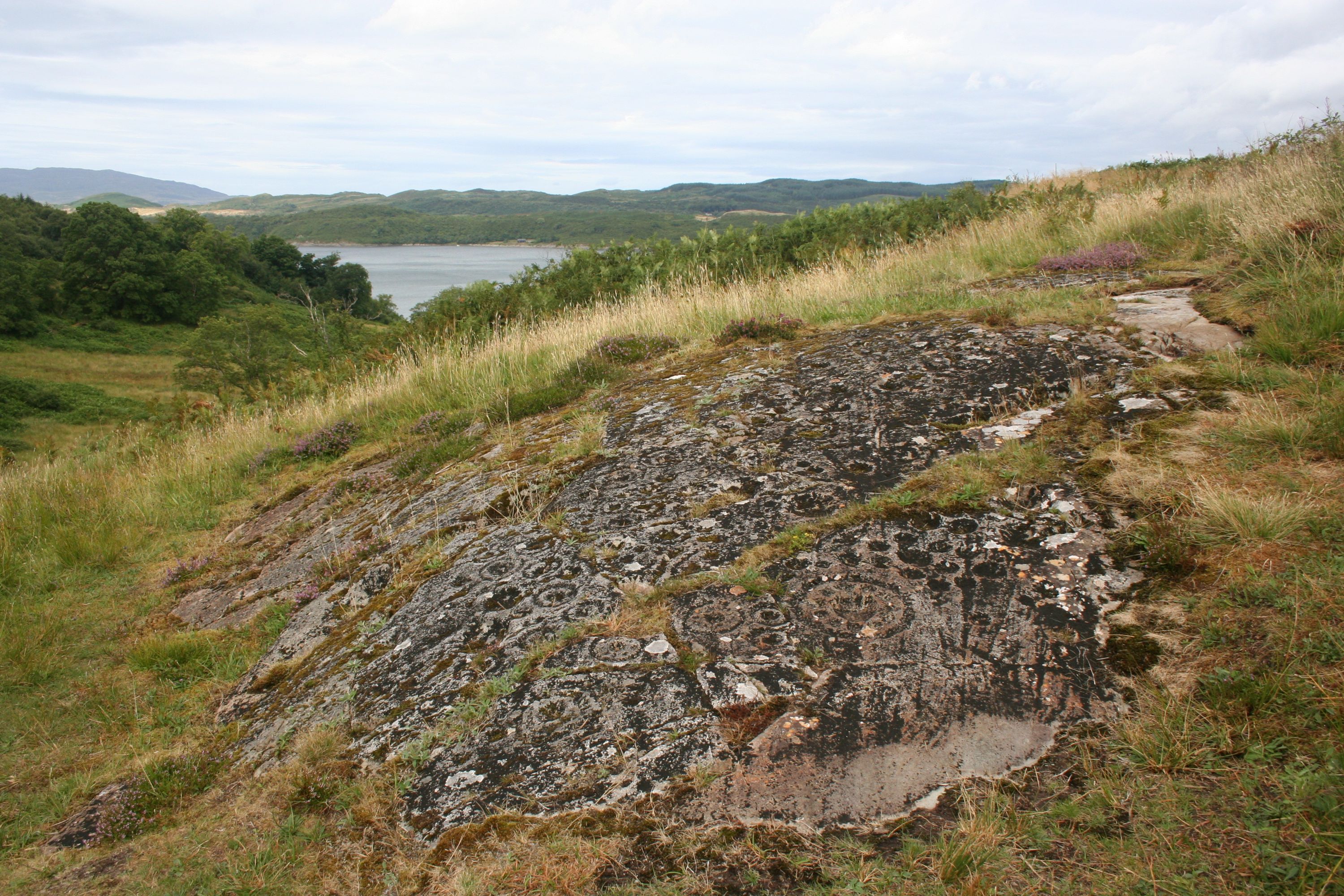 The rock art motifs at Ormaig, Kilmartin, are famous for their distinct rosette carving

Nonetheless, we did manage to record a number of panels, both in this area and in the neighbouring Kilmichael Glen.  For me, one of the highlights was a beautiful site where we recorded a large new panel containing unusual motifs which had been discovered by the farmer and reported to the archaeologists at Kilmartin Museum. 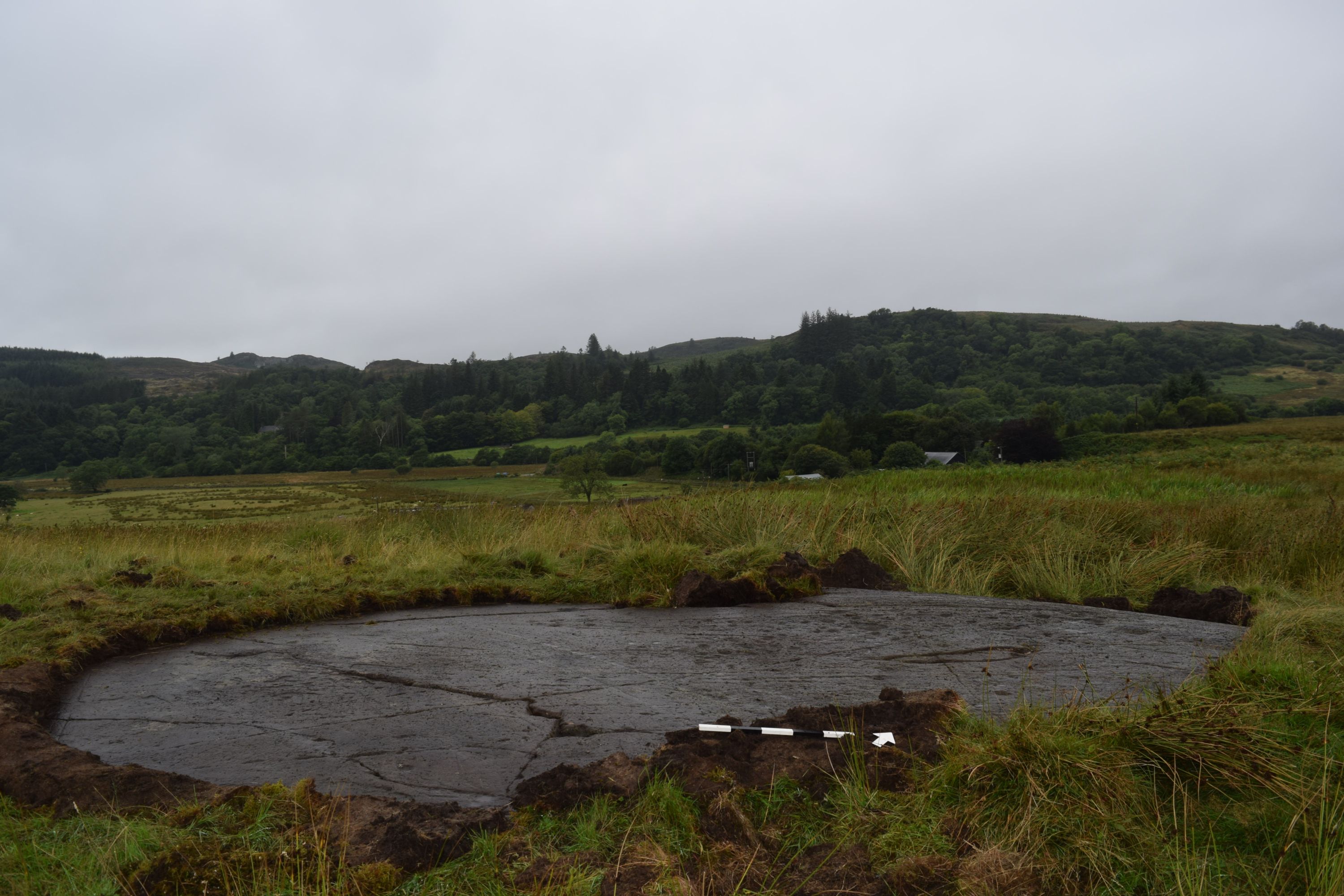 Although a number of new panels were located during the field school, for the most part we were working with records of existing panels, adding another layer in archaeological research which might go back for some years.  The information available was, however, quite varied: some panels had been recorded on multiple occasions and had good descriptions (and sometimes drawings and photographs) and up-to-date coordinates, whereas some others had only been sighted once, had fairly minimal descriptions and were located within a very broad coordinate range.  Many sites were also turf-covered so locating them at all was difficult, and when motifs were uncovered sometimes the most challenging task was to work out whether we were looking at something which had been recorded before or something new. For example, at one site near Ormaig forest, a number of different sets of motifs had been recorded by different people, over a number of years, on a small rocky knoll now overgrown by turf and reeds.  We did a lot of work to uncover about 11m of turf but turned up only a small areas of motifs, which weren’t obviously connected to what was previously described.  It was only on a later visit to the site (and more turf removal) that the arrangements of motifs became clearer and, even then some previously recorded motifs couldn’t be found.  Perhaps a job for another year! 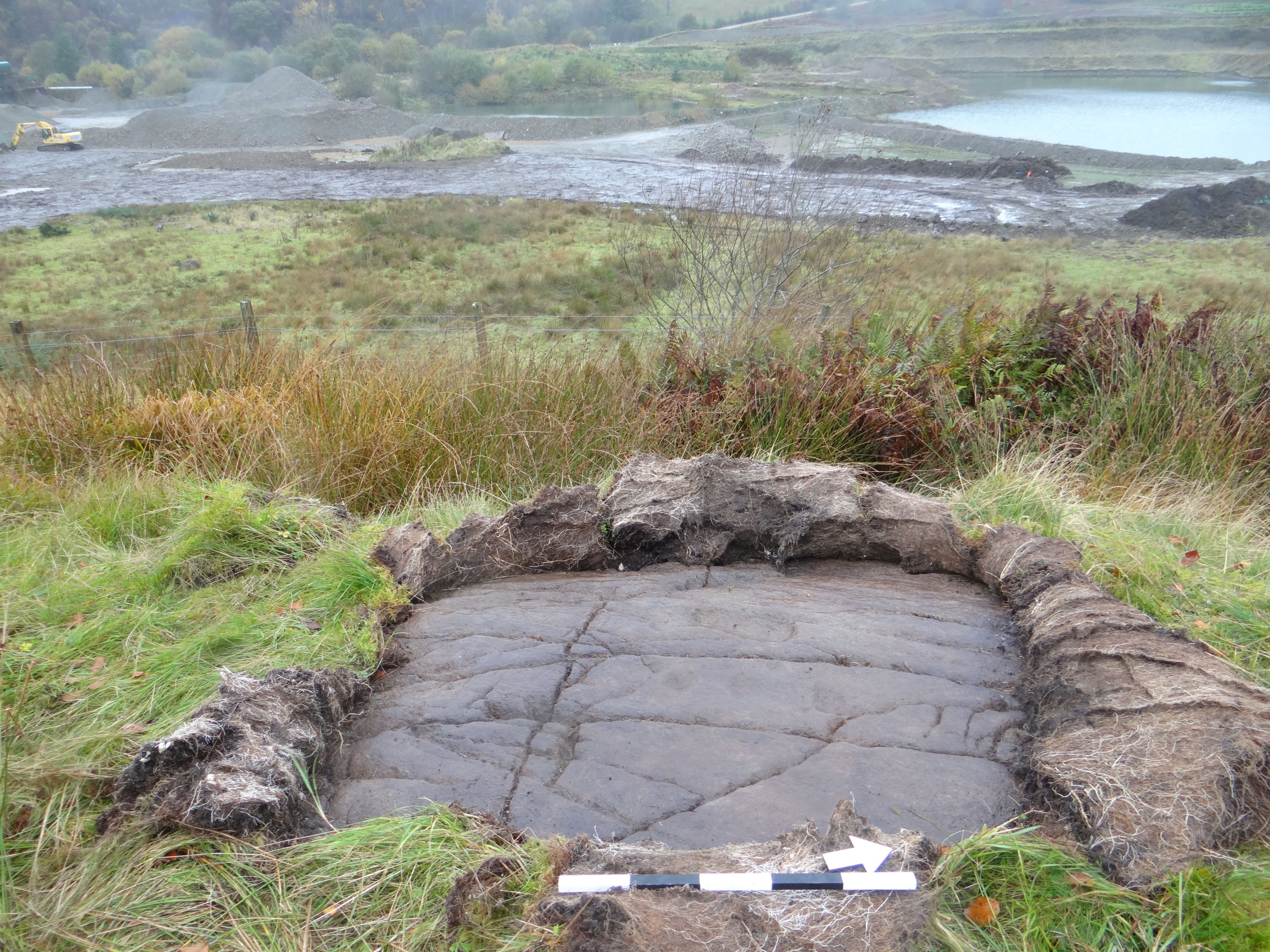 Although challenging to find, these motifs were finally uncovered at Upper Largie, Kilmartin

After the field school, I jumped at the opportunity of continuing to work on the project by volunteering longer term.  Happily, this has involved further fieldwork – including going back to Kilmartin – but also a fair bit of data entry.  This probably sounds dull, but I think it has allowed me to see the project in a broader context.  It has also helped me to appreciate the effect of the quality of recording in the field on the end result which goes into the system, which seems obvious, but can be difficult to appreciate when you are standing in the rain/head-high bracken/midgie swarms and are just glad to have found the site at all!  I am really enjoying working on the rock art project, and must give my thanks to Tertia Barnett and Maya Hoole at HES who have been endlessly supportive and patient over the last few months. 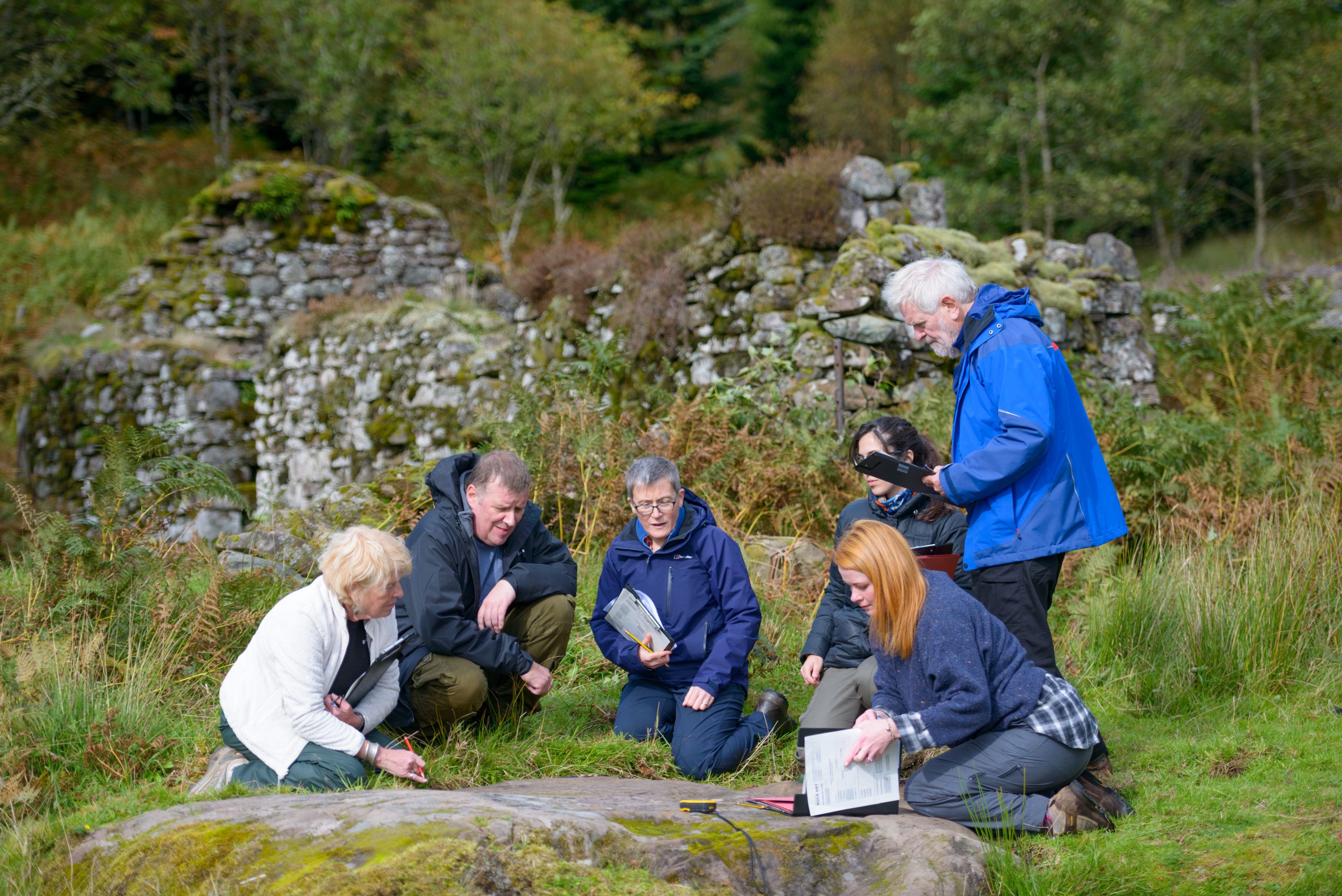